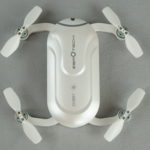 The Zerotech Dobby was an impressive drone when it was released a couple years ago, but the price tag was a little high. Many drone enthusiasts initially cringed at the idea of a “selfie drone” but with other small flying cameras gaining popularity (like the DJI Spark), the idea is now more mainstream. Now that the Dobby is under $200 it is one heck of a deal.

We took a look at the camera quality and features of the Dobby and found it to be a compelling option at its new low price point. Its camera still stands up well to the competition. With the price tag falling closer to $200 it is definitely worth another look.

If you are looking for a foldable GPS quadcopter with some sweet flight modes then keep on reading.

Personally, I’m not a big fan of selfie drones or even selfies for that matter. That said, there is no doubt that the Dobby started a fad of sorts by introducing the original “selfie drone.” While I think the idea of purchasing a drone to take pictures of myself is odd, I do like the idea of a small but portable drone with an HD camera that has multiple shooting modes. The Dobby is just that, a small and portable HD camera, that happens to be able to fly with the help of your phone.

The Dobby sports an impressive 13 MP 4K camera. It has built-in electronic image stabilization (EIS) that does a very nice job of smoothing out the drone’s movements. Dobby was built to fly slow and steady. If you accelerate more quickly you’ll notice some odd EIS cropping. So fly slowly and you’ll be happy with your video.

I was shocked to discover that the image quality of the Dobby holds up extremely well to its more expensive peers. When you see the video and photos the Dobby produces you will see why it initially demanded such a high price tag.

The Dobby was a very easy drone to fly. Its sensors do an impressive job of keeping the drone steady and level. Dobby has a handful of different modes that make it easier to fly than some other drones, but it also has modes that give the drone pilot the ability to maneuver it like a standard quadcopter.

We weren’t able to get our Dobby connected to a new iPhone 8 or the Google Pixel. These two newer phones didn’t work and we aren’t sure why. It did work well with the iPhone 7+ and iPhone 6 we tested. The camera angle is adjustable, but only manually. Once you are in the air you’ll have to deal with the angle you chose. Flying with your smartphone isn’t ever my personal preference and it is a little disappointing that you can’t pair it with a real remote control. That said, with the stability of the Dobby and given its intended purpose, this is not a major limitation.

***WARNING*** Follow the battery charging instructions. The Dobby charger will let you plug the battery in backward (a rookie design mistake). Doing this will completely discharge the battery and render it useless.

Should You Get a Dobby?

There are not many options for drones that combine a small foldable size with a crisp HD camera. If you are looking for something inexpensive and portable then the Dobby is a good choice. With other drones in the price range producing sub-par image quality, you will be impressed with the Dobby’s camera. The major limitation seems to be app support, with the latest generations of smartphones not pairing with the Dobby.

The Yuneec Breeze is another good option if you are looking for an HD camera drone with electronic image stabilization for around $200. If you have a slightly larger budget we’d recommend taking a look at the $399 DJI Spark. It will give you a two-axis mechanical gimbal and is a spectacular beginner aerial photography drone. If you aren’t ready to spend $200 on a quadcopter then take a look at the Ryze Tello. It is the best drone you can buy for under $100.

8 thoughts on “The Dobby: An Affordable GPS Drone Under $200”