UDI has released another update to their extremely popular U818A drone lineup – they call this drone the Discovery 2. This latest version with WiFi FPV capability is also available as the U49W Blue Heron from Force 1. The styling of the drone and the remote control have improved and the smartphone application is excellent. We took a careful look at the Discovery 2 to see how it stacks up when compared to its predecessors and competitors. Overview of the 818A Discovery 2

The Discovery 2 has some nice features for a drone in its class. It has altitude hold, headless mode, WiFi FPV, an adjustable HD camera and an intuitive smartphone app that will allow you to fly the drone without a remote. You can even draw a path on your smartphone screen for it to follow, although after some testing we don’t recommend you fly this way. With the Discovery 2, UDI really seems to be focusing on flight time, and you will be hard-pressed to find another drone in this category that can stay airborne for 15 minutes.

The camera is the best we have seen from UDI and better than most drones in this class. Sadly, most drones in this price range suffer from poor cameras. UDI surpasses most of its peers in this case. Not only is the camera quality better, it also has an adjustable camera angle. This is nice because you can fix the camera based on how you fly and what pictures you are trying to capture. 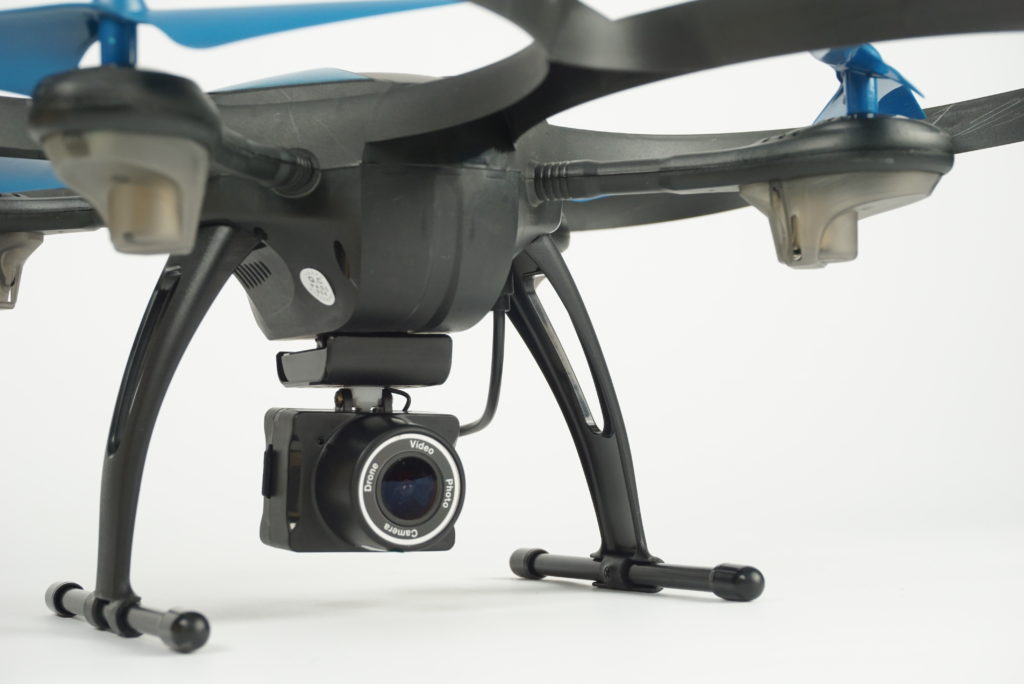 UDI has greatly improved flight time on the Discovery 2. They claim up to 18 minutes, which is almost double most drones in this range. Don’t expect a full 18 minutes, but the 14-15 that we experienced with aggressive flying is still significantly better than most drones in this class. Flight times will vary greatly depending on how you fly and the environmental conditions.

The biggest disadvantage of the Discovery 2 is that it seems underpowered. We suspect in part that is to help maintain longer flight times. This was never designed to be a fast race quad, but we’d sacrifice some flight time for a little more zip. UDI is hoping you prefer the longer flight time… This drone was designed with the beginner pilot in mind. It’s built-in propeller guards keep hands safe from the spinning plastic props. The guard is big and tends to catch the wind on windy days. This drone is a lot of fun to fly but is not well suited for windy days. Previous versions of the U818A also suffered from low power and difficulty in the wind.

The Discovery 2 now has automatic takeoff and landing as well as automatic shut off if you get into trouble. If the UDI comes into contact with an object that locks up one of the props the drone will automatically cut the power. Not only is this a good safety feature but it also helps keep the motors from burning out. This may not seem like much but is an excellent feature. UDI clearly has taken the time to build and design a quality remote transmitter and clean and intuitive smartphone app. Not only does the remote have a nice solid feel, but it is also labeled. This may not seem like much, but is a little touch that many manufacturers fail to add. It isn’t fun when you think you are taking pictures, but instead, you are changing speeds. Labeled buttons help avoid mishaps like this.

The Discovery 2 has some nice features that make it an attractive drone for beginners. It has an altitude hold feature that works quite well and allows the quadcopter to maintain altitude without having to constantly adjust the throttle.

It also has a well-implemented headless mode that helps beginners maintain drone position regardless of orientation. It is a good way to help beginners learn to fly, but can be turned off for intermediate or more advanced flyers.

This quadcopter can be flown in high, medium or low speeds using the transmitter, or it can be flown exclusively with the smartphone app. When using the app you have two different speed modes to choose from. You can even fly by tilting your phone or drawn paths for it to follow. These features are fun and work well.

UDI took away the ability to flip the drone with the push of a button. We suspect this also may be to conserve power and extend flight time. It could also be that the drone just no longer has the juice to do a flip with a reasonable amount of altitude loss. UDI has been putting in good cameras in their drones for a while now and the Discovery 2 is no exception. Check out the camera specs below.

First person view or FPV allows the pilot to see in real time the view from the camera while the drone is in flight. It can be used to fly the drone or to help line up aerial photos. This drone achieves its FPV connection via WiFi to the drone. The FPV has a lag typical of WiFi Drones. We measured the delay to be about 0.2 seconds. We have found the FPV on the Discovery 2 to be useful for lining up photographs but we would not consider it good for flying using FPV to guide your path. That’s a shame because the wide field of view on this camera is better than most. The FPV can also be a little glitchy based on signal strength and interference in areas with a lot of interference, so your results will vary. FPV works best when flying with a phone. Using a remote transmitter with your phone degrades the FPV, but using the FPV does not disrupt controlling the drone with the remote. We experienced no fly-aways or loss of control due to using FPV with the remote. In general, WiFi FPV can be problematic because typically the transmitter signal and the WiFi signal operate on similar frequencies. Couple that with a lot of other similar signals if you are flying near houses and that can have poor results. 5.8 GHz FPV is far superior but typically is more expensive.

Overall, the optics on the Discovery 2 are well designed but the image and video quality are limited by the sensor or processing. The thing limiting video and image quality in-flight is the slow shutter speed. The shutter speed is most likely slow for one of many reasons including possibly a small sensor, high f/number, and/or poor image processing. The most likely cause is an inexpensive sensor, which can be the most expensive part of a camera.

Still images on a tripod compare well to the Sky Viper v2400 HD and are superior to the Syma X5UW. The image quality on the UDI Discovery 2 is limited by the 1 MP resolution, not by the lenses. There is no blurriness in the images so the quality could likely be better with a higher resolution sensor on the camera. The image quality does not degrade noticeably in the corners like many inexpensive cameras. Unlike previous UDI cameras, the relative illumination and color are consistent across the pictures.

The slow integration time (shutter speed) of this camera makes pictures with any kind of motion appear much grainier than still images. Decent pictures can still be captured.

Like aerial photos, the video is much grainier than still photos in real life situations where the drone has any kind of motion. The frame rate is just 20 frames per second, which is too slow and causes noticeable jumpiness in the video.

The smartphone app is one of the best we have used. There is nothing strange and no apparent bugs. The drone is easy to use with no issues at all.

We push drones hard in testing and so we experience several crashes. This drone held up well to minor crashes and bumps. The drone is very light weight so we have no doubt that it would continue to do well with many more crashes and significant abuse. The motors automatically shut off if they are locked which does a great job of preventing motor burn-out. The assembly process is reasonably easy with 4 screws for the legs, a snap-on camera, and a camera cable. We would love to see snap-on or fold-down legs on a drone like this. The most recent Syma X8 drones have snap-on legs and they really help when you want to transport the drone. The smalls screws are a pain to use, but in the big picture, this is not a major issue.

Should I Buy a UDI Discovery 2?

The UDI Discovery 2 is a very good drone for a beginner. It is durable and easy to learn how to fly. It has a good flight time and excellent features. We love the remote and redesigned smartphone app. The camera is very good compared to its peers. We would love for it to have more power and perhaps a higher frame rate for video, but overall this is a solid drone for any beginner. If you are looking for a drone with more ability to handle the wind then we suggest you take a look at one of the Syma X8 models.